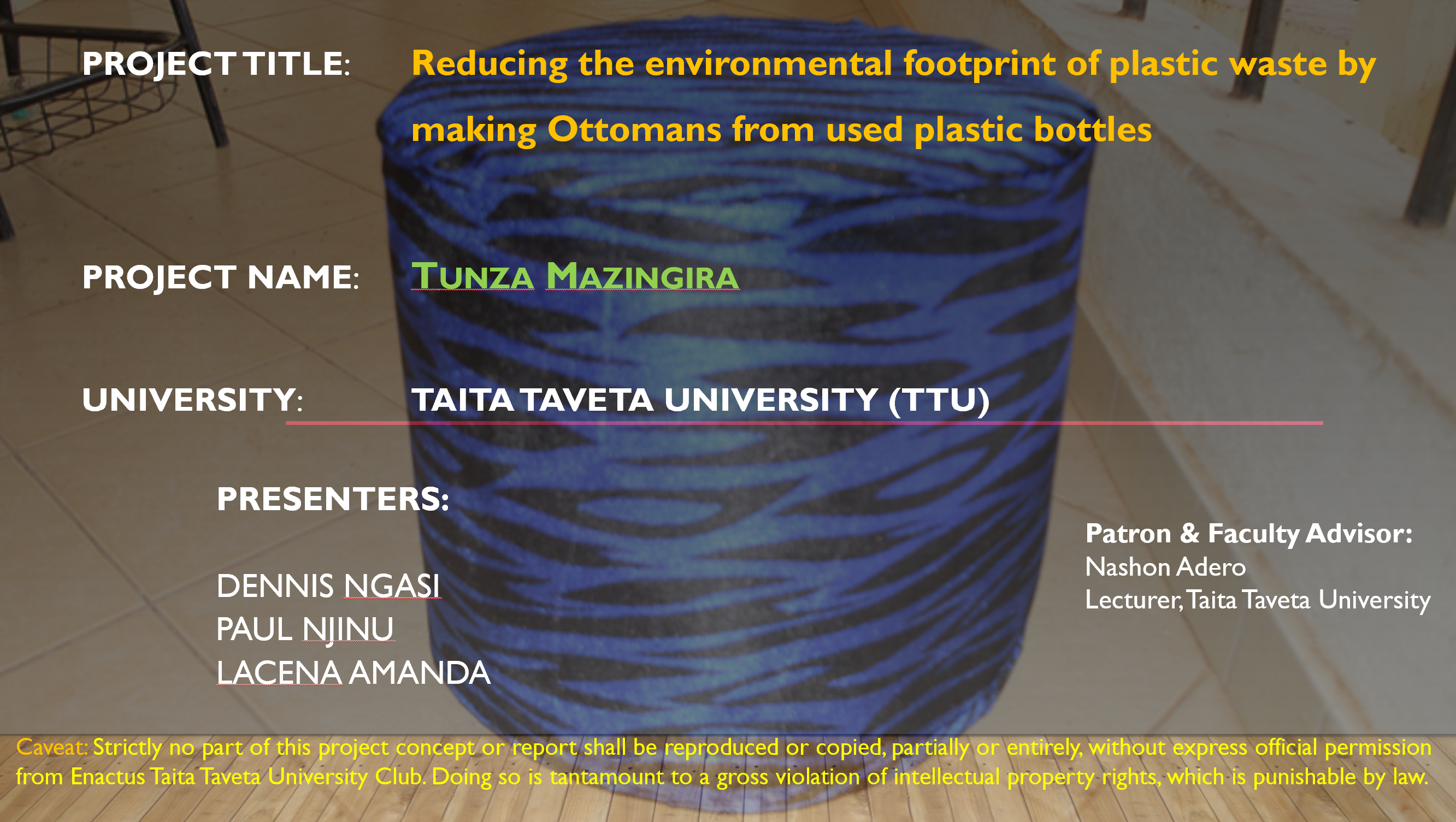 Their optimism was evident from the beginning as they posted on Twitter that they were going for gold, long before the finals began.

On 24th March 2022, after making several appearances in the world’s largest experimental learning platform of universities which is Enactus, even emerging top five in some fierce contests, the young Enactus Club of Taita Taveta University revived in 2020 finally won the third edition of the BIC Education Challenge in Kenya. Besides giving monetary support, BIC East Africa experts will mentor the winners so that they can face the next challenge. The ultimate challenge is to compete with winning teams from more than 30 countries around the world for the more revered title of the Winner of Enactus World Cup, traditionally unveiled in the USA.

Being the overall winner nationally in Enactus competitions is a coveted title which, as expected, has traditionally been going for the big names of the Kenyan university landscape. The diligent and ambitious team from Taita Taveta University changed this old script, to the amazement of many as they will go down in history as a young students’ academic club from a young university that caused an unexpected seismic shift and a total breach of tradition as it were. Their optimism was evident from the beginning as they posted on Twitter that they were going for gold, long before the finals began.

The BIC Education Challenge was launched in late 2019 as a partnership between BIC East Africa, the BIC Corporate Foundation and the NGO Enactus Kenya. The challenge sees submissions by university student teams from all over Kenya out of which shortlisted teams are invited to pitch their ideas to a panel of BIC experts at the East Africa headquarters in Kasarani, Nairobi.

Being the overall winner nationally in Enactus competitions is a coveted title which, as expected, has traditionally been going for the big names of the Kenyan university landscape. The diligent and ambitious team from Taita Taveta University changed this old script, to the amazement of many as they will go down in history as a young students’ academic club from a young university that caused an unexpected seismic shift and a total breach of tradition as it were.

Though late entrants as a young university, the Enactus Taita Taveta University team emerged tops nationally in the finalists’ competition, breaking the tradition where old universities in the game have been dominating the top position ever since: Jaramogi Oginga Odinga University of Science and Technology (JOOUST), Kenyatta University, Kabarak University, Egerton University, Moi University, Strathmore, and similar heavyweights in the league table.

The Exciting Journey to the Top

For a club that was revived in 2020 with only five active members, the ride to the top has not been without braving headwinds and sleepless nights, punctuated with lows and highs. The club was revived through the patronage of the Enactus Faculty Advisor at Taita Taveta University, Nashon Adero, who is also a lecturer in the Department of Mining and Mineral Processing Engineering and a youth mentor at Impact Borderless Digital in addition to being a volunteer youth mentor under the Kenya Presidential Digital Talent Programme for young STEM graduates.

The President of Enactus Taita Taveta University (TTU) in 2020, Imelda Nasubo, who was by then a fourth-year engineering student and had to steer with the Faculty Advisor what would be the Enactus TTU Revival Marshall Plan, had this to say as a commemoration of the exciting journey.

“Most pioneers are at the mercy of doubt at the beginning, whether of their worth, of their theories, or of the whole enigmatic field in which they labour.” Johann Wolfgang von Goethe

“Indeed, this is how it all felt in the beginning! I felt overwhelmed by everything that I was required to put in place as the first president, from constitution drafting to establishing a leadership structure to rallying students to join the club, to coming up with a team for our first project for the Global Races Competition. Throwing in the towel would have been an easier option but our Faculty Advisor’s words kept ringing in my mind, “Reasons don’t matter; results do!” There was no room for excuses!

Our dream was to inspire TTU students to cultivate an innovative culture that was built upon an entrepreneurial foundation.  From five willing students in October 2020, the club has grown to accommodate thirty students of amazing ingenuity who have been able to come up with various innovative projects such as ELIMISHA RAFIKI that aimed at narrowing the knowledge divide among young learners by enhancing the quality and equity of access to learning resources using an assisted peer-to-peer online system, giving priority to STEM subjects. In addition to that, we came up with USAFIRI BORA which was to aid people living with a disability.  I am definitely thrilled to see them not only growing but also winning a coveted national title in this year’s BIC competitions. I am confident that the zealous leaders left behind will take the club to the greatest heights possible!”

Imelda handed over the mantle of leadership to Paul Njinu, an engineering student, who also had this to say:

“My journey to knowing and understanding about Enactus started on 25th November 2020 when, alongside four other students, we started working on the project ‘Rethink Plastic.’ One year and four months later, we have grown wiser and more project-oriented with the ability to work on award-winning projects. From a team of five members to winning the nationwide BIC competition, that’s progress!

Working alongside Imelda Nasubo, as the Deputy President of Enactus TTU, was an amazing experience that has enabled me to grow my leadership skills to the position of the president of Enactus TTU. Our faculty advisor has equally been really supportive and constantly makes follow-ups pertaining to the club’s growth. A slogan our faculty advisor, Nashon Adero, likes to use, “Reasons don’t matter; results do!”, has kept us moving forward without considering the giants along the way. We had not thought that a small university from a remote bushy area would emerge the best. It happened and there’s no doubt that it will happen again! This win is definitely a first but among many others in the future!”

Dennis Ngasi, the Project Coordinator for members of the Enactus Taita Taveta University Club, could not wait to share this:

“I don’t really remember when I joined Enactus TTU but I can’t forget why. It was for the love of innovation and team building. I knew this was a platform that can take an idea to the next level, through teamwork, unlike when you are working alone. As fate had it, I was elected to be the project coordinator, something I ended up loving so much. It was time to get to work. I’m glad to have been in charge of the project Tunza Mazingira from the beginning to the end.

It wasn’t an easy journey. But as it is said, good things take time and sacrifice. We put in a lot of effort and here we are, the national champions of the BIC Education Challenge 2022. I’m so motivated and I really want, together with this great team, take Enactus TTU to the next  level.”

Lacena Amanda, an engineering student and the Communications Secretary of Enactus Taita Taveta University Club, could not hide these reflective moments:

Enactus for me has been more of family than a club. I joined the team in August 2021 and I got warm welcome and acceptance from the team. I have grown at a personal level and in matters teamwork. I am just forever grateful.

I had completely lost hope in us even appearing among the top-three teams for this year’s big challenge because we were going up against some really confident giants. We had held several meetings organized by Enactus Kenya at Grace Hotel. On 24th March 2022, however, the new venue – BIC East Africa headquarters in Kasarani, had everything feeling different. Teams had polished and done their homework right. As the rest were presenting, I couldn’t help but sweat asking myself all the time, “How can we possibly beat that?” We were the last team of the day and with all the other teams presenting before us, I had already lost my morale and confidence. We were three presenters, and I must say working with these guys has been amazing, how they calmed my tense nerves, the reassurance that all would be well was all the boost I needed. We went before the jury and I must say we gave it our all.

Announcing the results 15 minutes after our presentation had my intestines all curled up, my heart racing and my hands shaking. Kabarak University in 3rd position, Moi University in 2nd position, and then Taita Taveta University won overall!! I was overjoyed. We were called on stage to receive our prize, but my feet weren’t moving, the excitement of knowing all those sleepless nights weren’t in vain made the win even more amazing. To many more wins…the only way now is up”.

The Patron and Faculty Advisor had this to share in addition to his past tweet as part of his motivational messages to Enactus members.

“Ultimately, a positive attitude won, resource constraints notwithstanding. Why? Because the club members have been mentored to exercise the conviction that actioning social innovation for a cleaner and healthier environment, as opposed to racing for the top position in a contest, should always be their ultimate focus and joy. Winning the competition is just a bonus, a byproduct. These social innovations should be regarded as the novel contribution of young Kenyans to Kenya Vision 2030 and the UN Sustainable Development Goals.

These exemplary students of Taita Taveta University have demonstrated that they are a critical part of the equation for enhancing the visibility of the institution. With regular support and structured mentorship, they will achieve more. Commensurate recognition of their achievement and wide publicity of the same are highly recommended.”