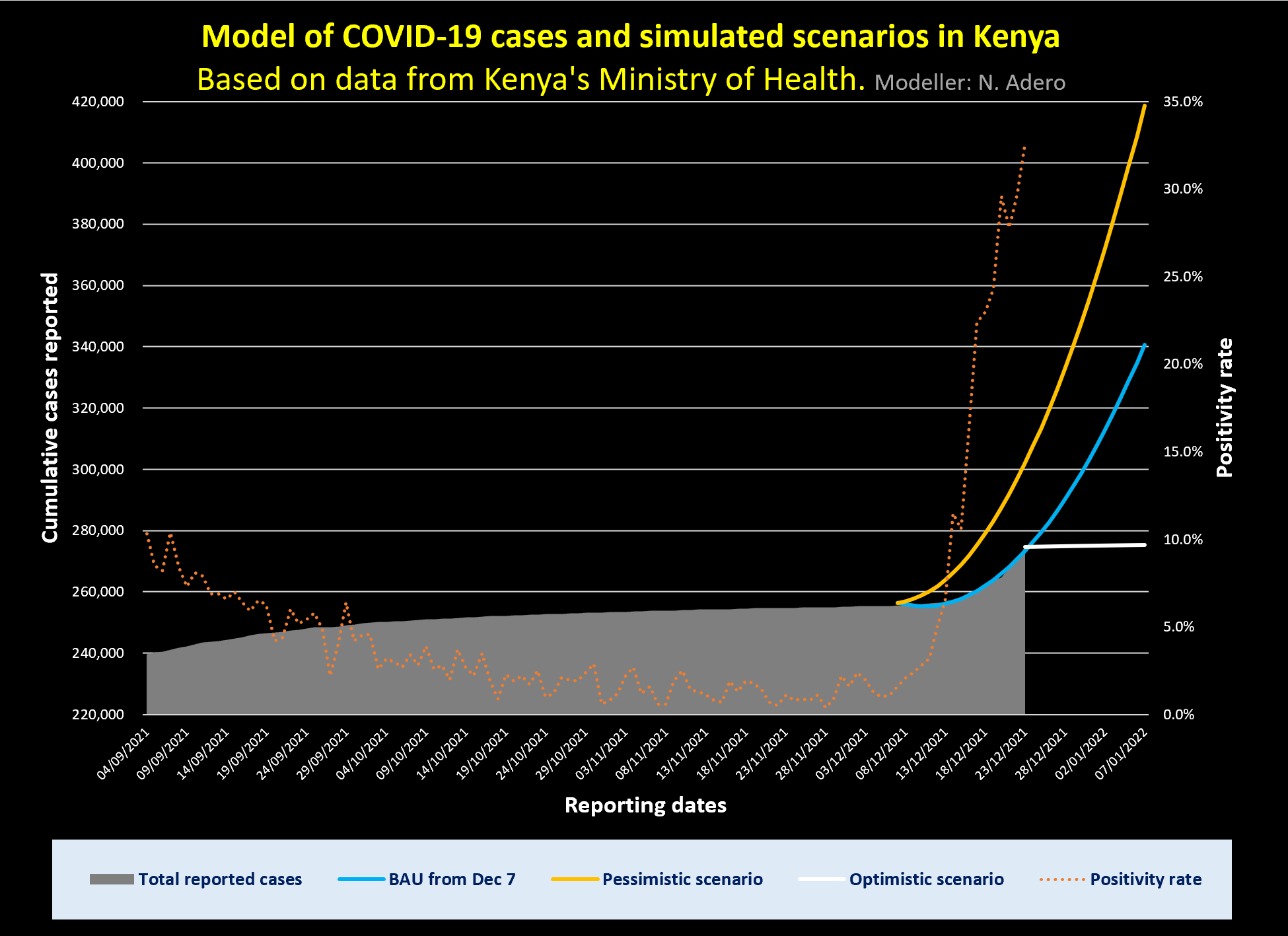 Updates across the world and new model scenarios for Kenya

A New Battlefront at the Door of Victory?

Already in December 2021, the unprecedented surge in COVID-19 cases due to the dominance of the Omicron variant has been evident across the world. No part of the world has been spared the fast-spreading variant, first detected in South Africa. This is a graphic case of encountering a new battlefront, surprises and headwinds just at the door of victory.

To a world that was hopeful of ending the year with an assurance of victory against the pandemic due to the encouraging tailwinds pushing vaccination rates closer to herd immunity, this new development reinforces the fact that the pandemic is a wily, wavy warrior we must be ready to confront with long-term measures, behaviour change for compliance with containment measures being critical.

All regions have realised a surge in new COVID-19 cases since the Omicron variant was detected.

Globally, in 2021, the total reported COVID-19 cases have risen from more than 243 million on October 21 to more than 278 million on December 23, 2021. The fast rise in cases has accompanied the entry of the Omicron variant.

With a case fatality rate of 2% and a recovery rate of 91%, Kenya recorded an all-time high of 3746 new cases on December 23 with an equally all-time high positivity rate of more than 32%. The testing rate had increased to 82 tests per million people per day, up from 74 on May 8, 2021. The surge in cases in Kenya after the entry of the Omicron variant was evident from December 7, with positivity rates increasing fast from 1.1% to more than 2% within two days, then sustained at double digits from December 14, 2021 onwards.

Unusually high new cases have also been reported in other African countries, some examples of surging new cases reported on December 23 in: Zambia (3380), Mozambique (2445), and Uganda (710). Uganda’s testing rate had increased from 54 tests per million people per day on May 8 to 68 on December 23, 2021.

Snapshot from the Americas

India had by this date topped 34.7 million cases to retain the second place after the USA, increasing the testing rate from 465 tests per million people per day on May 8 to 690 on December 23, 2021. China was far down at position 114, two positions behind Rwanda, with more than 100,000 total cases.

The Key Metrics of Scientific Curiosity

The global probability of developing severe cases out of the total reported cases has remained more or less steady at about 0.03%, so have the global case fatality rate (about 2%) and recovery rates (about 90%). Going forward, any researcher will be curious to examine how the Omicron variant will tilt the scales in reported cases and the metrics of performance in this convoluted war against the pandemic.

The lower probability in Africa (0.017%) of developing severe (serious or critical) cases out of the total reported COVID-19 cases contrasts sharply with the higher probabilities in Oceania (0.041%) and North America (0.035%). Geographical and demographic factors are likely the most important factors in explaining this key difference, given the wide variance in vaccination and testing rates across the regions.

The higher case fatality rates in South America (3.0%) and Africa (2.4%) than in the other regions show that they post a higher likelihood of death from the reported COVID-19 cases despite having a lower share of severe cases. The much lower vaccination rate in Africa could explain the higher chances of death from the few severe cases. This finding firmly supports the call for enhanced vaccination rates and health management systems in Africa.

Carrying on the tradition of converging on Kenya, this modelling series has simulated the likely scenarios of the cases in Kenya from December 7, 2021 to January 7, 2022. The Kenyan model used here, which has been developed and applied to predict cases since April 2020, has established that the COVID-19 wave has a period of about four months. The last model predicted that November was the month to watch, which is four months after the fourth wave of July. The December wave has not come too far from November. The graphs below show the likely case growth scenarios in in Kenya.

From the simulated scenarios, the following key points emerge:

The observed surge in new cases across the world, Africa not spared, is a testament to the rapid spread of the Omicron variant of Coronavirus. Over time, the observed higher case fatality rate in Africa, despite the lower likelihood of developing severe cases in the region, confirms the need to enhance vaccination rates on the continent as well as case management with improved healthcare systems. This will help reduce the share of vulnerable people with comorbidities and unvaccinated cases who can succumb to the virus.

The model of likely scenarios in Kenya, especially due to the festive season with increased community movements, portends the likelihood of topping far above 300,000 total cases in Kenya by January 7, 2022. The country may experience the fifth wave with more cases than ever before unless containment measures are strictly followed or tightened.

Following are the key recommendations on COVID-19 containment.

Register in advance for this meeting:
https://ttu-ac-ke.zoom.us/meeting/register/tJMldOuhrj8jHdUU0QsF_sZ2UvVQoq3n2pfI